Endocannabinoid System and Benefits of CBD

WHY AND HOW ARE CBD PRODUCTS CONSUMED?

Today, it is almost impossible to go shopping in any city in USA or Europe without encountering some kind of CBD (Cannabidiol) product. The comments and experiences around this non-toxic cannabinoid, as stated by the World Health Organization, have led many people to include it in their daily health and wellness routine.

You may have heard people boasting about the various benefits of different CBD products, but what exactly does research tell us about the therapeutic properties of this cannabis compound?

To maximize the benefits of this non-toxic cannabinoid, it is essential to answer the following questions:

WHAT ARE THE CBD BENEFITS? 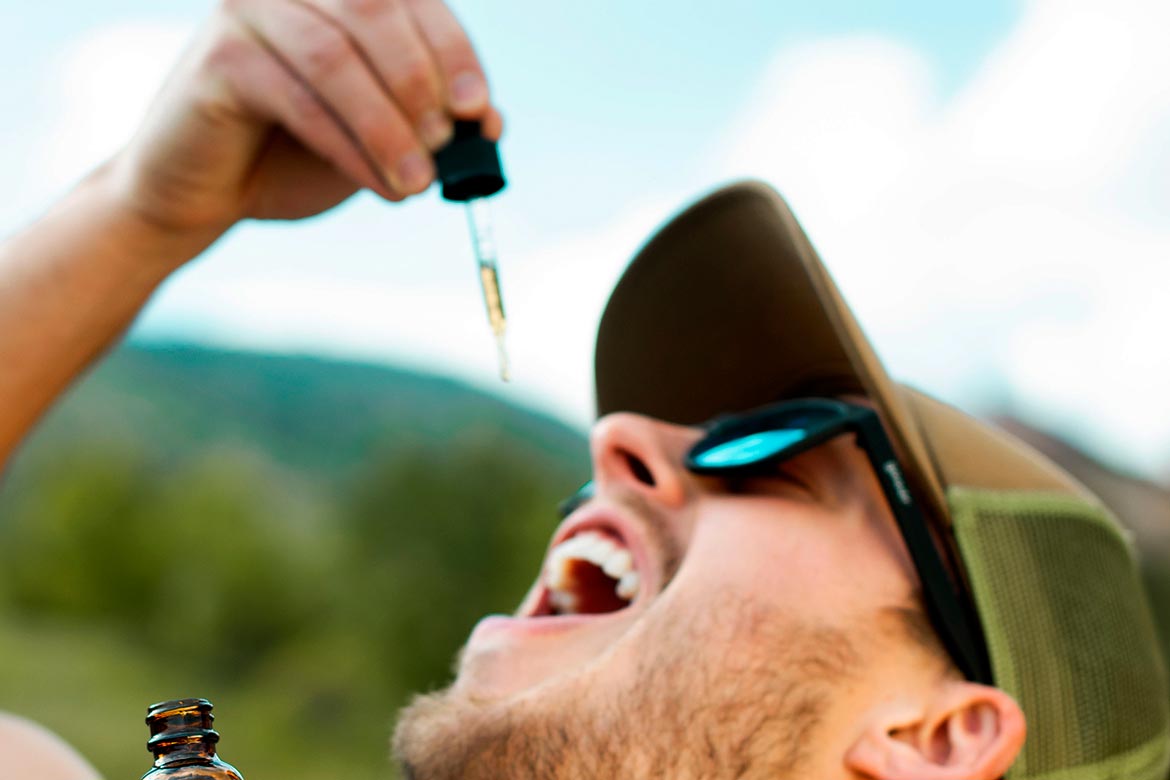 According to multiple scientific researches, when CBD is introduced into the body, it interacts with our cells, generating a molecular homeostasis effect that results in certain therapeutic properties, such as pain relief / anti-inflammatory properties.

The therapeutic potential of CBD as an analgesic is widely supported by numerous studies. For example, research has revealed that CBD oil is a good treatment for a variety of chronic pain conditions, including neuropathic pain in multiple sclerosis and incurable cancer pain. A study published in 2010 by the journal Future Medicinal Chemistry concluded that CBD also showed the potential to inhibit inflammatory pain.

From this research, we know that CBD interacts with a wide range of proteins located throughout the body and in the central nervous system. Most of this interaction occurs in the Endocannabinoid System (ECS), an internal system that helps regulate homeostasis (stability between body functions) in our body, specifically involving the CB1 and CB2 cannabinoid receptors.

CBD is a reverse agonist to cannabinoid receptors, which essentially acts as the opposite of THC, forcing these receptors to create an intoxicating effect.

CBD has shown the potential to inhibit the absorption of anandamides, which are a natural endocannabinoid molecule that regulate pain. When CBD interacts with cannabinoid receptors, it ends up increasing levels of anandamide and 2-arachidonoylglycerol, both endocannabinoids found throughout the human body. Other studies have also shown that CBD's alpha-3 glycine receptors inhibit chronic pain and inflammation associated with dysfunctional glycine receptors.

Besides the Endocannabinoid System (ECS), CBD also has an effect on receptor proteins, such as the serotonin 5-HT1A receptor and the vanilloid receptor TRPV1. Some researchers believe that the supposed anti-inflammatory and analgesic properties of CBD may come from the activation of these additional biological pathways.

There is also evidence that identifies CBD as a possible treatment for depression and anxiety disorders. For example, a study published in February 2019 in the Brazilian Journal of Psychiatry concluded that 300 milligrams of CBD was the optimal dose for reducing anxiety during social activities, such as public speaking.

Similar results have also been obtained through animal research, such as the 2014 study that determined that CBD has anxiolytic and antidepressant effects.

Long before CBD became popular, it was widely used as an incredibly effective treatment for reducing epileptic seizures in children and adults.

In fact, Epidiolex, the first cannabis-based drug approved by the Food and Drugs Administration (FDA), is a treatment option for people suffering from severe forms of epilepsy, such as Dravet syndrome and Lennox-Gastaut syndrome, which cause frequent seizures in children.

A 2018 study focused on pediatric patients revealed that the Full Spectrum CBD oil reduces epileptic seizures in patients, while 10% end up being completely seizure free.

CBD has also emerged as a candidate in the treatment of opioid or tobacco addiction.

A 2015 study by researchers at the University of Montreal Hospital Centre compiled 14 different studies on the subject and concluded that CBD could have therapeutic properties for addiction to opiates, cocaine and psychostimulants.

In a 2013 study published in the journal Addictive Behaviors, researchers examined whether CBD could reduce tobacco addiction. After treating 12 people with CBD inhalers and 12 others with placebos for one week, the team found that the people treated with CBD significantly (40%) reduced the number of cigarettes smoked, while the group receiving the placebo showed no significant difference.

INSOMNIA AND OTHER SLEEP DISORDERS

While more research is still needed to fully understand the health benefits of CBD, many consumers are still trying to integrate this non-toxic cannabinoid into their daily lives.

For example, CBD has become a popular alternate treatment for insomnia and other sleep-related problems.

In a retrospective clinical case from 2019 published in the Permanent Journal, researchers examined the use of CBD for anxiety and sleep in 72 patients. 25 of them mentioned lack of sleep as their main concern.

After one month of CBD treatment, 66% of the patients showed sleep improvement, as compared to 25% who actually had worse sleep. When the research team evaluated the patients after two months, 56% showed sleep improvement, as compared to the first month. The study also revealed that the subjects treated with CBD saw a more significant reduction in anxiety than insomnia.

There are many forms of CBD products available on the North American market. These are gradually reaching Chile and the rest of Latin America, and each of them offers a possible path to therapeutic relief.

The approval in USA of the 2018 Farm Bill, which came into force in January 2019, legalized the production of hemp plants with a ˂ 0.3% THC content, bringing hemp-based CBD products under the watchful eye of the Food and Drugs Administration (FDA), which is preparing comprehensive regulations to ensure consumer safety.

Outside the United States, CBD products have also been an international success. In Canada, where the consumption of cannabis by adults has been legal since October 17, 2018, both hemp-derived CBD and marijuana-derived CBD are available in all provinces.

The European Union (EU) has also established regulatory guidelines for hemp-derived CBD oil, allowing hemp growing as long as the THC content does not exceed 0.2%.

Several countries in Central and South America, including Colombia, Peru and Brazil, have also relaxed restrictions on CBD oil and medical marijuana.

Meanwhile, Chile has allowed for the first time the growing of hemp plants for the production of essences, authorizing our company Austral Hemp.

It goes without saying that the wide acceptance of CBD throughout the world has led to new products entering the market.

The method of consumption is an important factor in the effectiveness and time it takes for CBD to take effect in the human body.

Below you will find the most common types of CBD products and how they are consumed:

Of the different methods of consumption, sublingual is commonly seen as the fastest and easiest way to administer a CBD dye or CBD oil.

Simply use the dropper that comes with the CBD oil and place two or three drops directly into your mouth, under the tongue, leaving the drops there for 30 seconds to one minute before swallowing, so that the mucous membranes in your mouth can absorb the CBD.

In this way, the sublingual method completely bypasses the metabolization process and allows active cannabinoids to enter the bloodstream faster and more abundantly.

When you eat food with CBD, your body processes it very well because it is a non-toxic compound that travels through the digestive tract and liver before reaching the bloodstream.

If you're looking for another effective method for the body to quickly absorb CBD into the bloodstream, smoking high strains of CBD or vaporizing CBD is also a viable option.

When CBD is inhaled, the cannabinoids are directed to the lungs and are quickly absorbed into the bloodstream and put into circulation throughout the body.

CBD can be applied directly to the skin in the form of creams, oils or lotions and absorbed through the surface, where it interacts with localized cannabinoid receptors.

There is a wide selection of topical CBD products that may be beneficial for treating specific areas of pain or inflammation, such as CBD creams and balsams.

Keep in mind that the skin has a low percentage of cannabinoid absorption, so you may need to apply a good amount of topical CBD infusion to penetrate the skin through the pores.

Isolated from the CBD

This is a way how CBD is used to incorporate it into food or drink products, as well as to vaporize it and ensure that the product does not contain THC, but also no other cannabinoids that are present in products made with Full Spectrum Hemp Essence and can be beneficial to the well-being of the consumer, reducing their therapeutic alternatives.

How long does the effect of CBD last?

The onset time and duration of CBD depends on many circumstances, including the method of administration, dose, and individual-specific factors, such as body mass and metabolism.

Note: All information contained in this guide is provided for information purposes only and should not be construed as medical or legal advice of any kind. Austral Hemp always recommends that people who want to start consuming its CBD products and are under some medical treatment consult their physician before starting its administration. It also advises that its products not be consumed by minors or pregnant women without the direct supervision of a responsible doctor or therapist.

Hemp is not different from cocoa, aloe vera or amaranth; in other words, it is nothing more than a wonderful plant, the consumption of which brings enormous benefits to people's health, as it grows under organic standards, free of pesticides, and a balanced substrate. Hemp has been a food and source of vegetable fiber for man for, at least, 5,000 years. From its se...